A second year student at St Charles, Luigi joined us from The Moat School and is 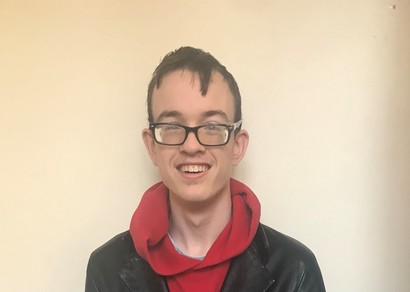 currently studying L3 BTEC Media and A Level Photography. Luigi previously studied GCSE Maths at the college, achieving a Grade 5. Luigi is extremely passionate about both of the courses he is studying, stating the courses allow him to be ‘expressive and creative.’  Luigi further comments that the self-expression aspect of both has enabled him to become more confident in his personal and educational development.

Luigi has made incredible progress during his two years in sixth form. He describes his previous educational establishment, The Moat School, as a comfortable environment due to the small classrooms and building. As a result, he recounts his first week at St. Charles as feeling ‘chaotic’ due to the fact that he was not used to studying and mobilising in an environment with a lot of pupils and having to move between various buildings for different classes and activities. However, “After many trials, I got used to the building, the staff members and my immediate peers and it felt that I have been at St. Charles for years.”

He has demonstrated extreme dedication to his subjects and takes every opportunity to complete his work to a really high standard. “I’m a perfectionist and I like people who are viewing my work to be intrigued by my thought process.” Last year Luigi created a media project called ‘A protect and survive: Zombie Movie’ with his then learning support assistant, Jaleel Sobers. “Jaleel and I worked with a few people in my media class to create one of my favourite projects of all time.” Luigi said “I was grateful for the experience because it allowed me to understand the work that goes behind creating a professional media project.” He also enjoys studying the conceptual aspect of Photography. “Many people say you have to ‘have an eye’ for photography, I believe a mixture between composition, identification of real-world view and practice allows an individual to be a phenomenal photographer.”

Luigi is an avid reader and enjoys all genres of literature. “Out of all the books I have read, I would recommend ‘One Hundred Years of Solitude’ as it has influenced me to not view any situation at face value.” At the college, Luigi has been involved in our book club enrichment group and states this provided him with some most memorable moments as he was able to make lots of new friends.

Joyce Laurent from the Learning Support Department who works with Luigi in Media has described Luigi as a “highly intelligent young man who loves to read all subject matter; he is amiable, friendly and has a wonderful sense of humour.”

An active member of the Learning Support Department, Luigi willingly gets involved in the activities organised by the team and accredits the department for not only helping him grow and develop academically but also as a person. Luigi states that the learning support area is a “great sanctuary where you are able to relax and complete your work.” Acknowledging his biggest achievement so far was not difficult for Luigi. “Being able to form friendships with people was one of my biggest challenges but I believe I have developed valuable social skills from the various sessions and workshops I have been involved in.” Leila Ibrahim is Luigi’s main LSA, and works closely with him. She describes him as a “well-mannered young man who is fond of researching topics analytically.” Luigi is grateful for the in class support he receives and states that “having additional 1:1 support in the lesson from Leila and my previous LSA Shamime has contributed to my performance and my confidence in college” His form tutor, Ms. Cotter, states that “Luigi is a pleasure to work with and he gets involved in tutor time and contributes to the college community through fundraising activities and group discussions.”

Outside of college, Luigi has been involved in a range of performances including pantomimes where he landed a lead role in the performances of ‘Basset’ and ‘Punkrock.’ “In the Punkrock performance, I had to improvise my lines and that was quite difficult. After self-reflection, encouragement from my peers and rehearsal, I was able to successfully deliver my role.” Luigi is interested in taking acting seriously in the future for work or leisure.

Luigi has received offers from all of his chosen universities where he is hoping to complete a foundation degree in the area of creative arts. Luigi proclaims that he see himself as a “visionary” and he would like to continue to study all forms of creative arts as it provides self-fulfilment. Well done Luigi! We are confident that you will continue to succeed in all of your endeavours and we will be looking out for your name in lights!