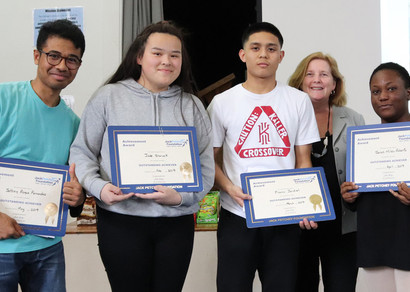 Daniel is in his second year here at St Charles and is a thoroughly exceptional all round student.  Having arrived in the UK speaking very little English, Dani did not let this stand in his way!  He persevered with his studies even though he could understand very little to start with.  He passed his GCSE English first time round with a very respectable grade which was testimony to his determination and work ethic in the subject. He has consistently been awarded Grade 1s in his termly academic monitoring ILPs for his overall academic studies where he achieves Distinction grades in his Performing Arts units and he achieved a Grade A in Spanish last year.  He is also studying art this year where he is reported to be doing really well. He holds an impeccable 95% attendance record.  All his teachers and peers strongly support his nomination for this award.

Daniel has been an exceptional student and thoroughly deserves his Jack Petchey award. A massive congratulation to you and we look forward to seeing your name in lights in the future!

On receiving the award Daniel stated: “I felt really good when presented the award by the College Principal in assembly.  I have loved being involved in College activities especially in the Performing Arts Department.”

Daniel spent his £250 winnings on GoBoat Adventure in Little Venice, London for a group of peers.

Jade is an extremely worthy recipient of the Jack Petchey Award. Having joined St Charles from the Moat School to study L2 Art as a stepping stone to her chosen L3 Performing Arts course, Jade has demonstrated real commitment and resilience to her studies during her time here.  She is on target for a good overall result facilitating her progression to university next year to study Performing Arts.  We will be sad to see Jade go but what a legacy she is leaving behind! She has been nominated by a range of staff in both the Performing Arts and Learning Support Department, in addition by her peers.

On receiving the award Jade stated: “I really wasn’t expecting to win. I feel proud of myself. I loved every extra-curricular opportunities  the college and Performing Arts department gave me.”

Jade chose to spend her £250 on purchasing ballet barres for the Performing Arts Department and buying some books for the Learning Support Reading Club.

Franco is in his 3rd year here at St Charles having progressed from L2 to L3 Sport this academic year where his teachers are very impressed with his commitment and dedication to his extended diploma studies.  He boasts an impeccable attendance and punctuality record despite having to undertake a particularly long journey to College daily.  He manages his coursework well and is described as a student who has “a sound knowledge of sporting concepts and little difficulty in absorbing new ideas and topics.”  He is a confident and reflective student who adopts a mature approach to his studies and he is always keen to develop his knowledge and skills in his chosen area of study further.  Franco tackles obstacles head on and never lets anything get in the way of his studying and progress. He is determined to excel on a curriculum and extra-curricular level which is testimony to the true grit and determination of Franco’s character.  He completed a very successful work experience placement at Kilburn Community School where he was able to put his coaching principles into practice and he demonstrated excellent leadership skills.  He is both a good team sports player as well as excelling on an individual sport level also.

On receiving the award Franco stated: “I was delighted to receive the award in front of peers and staff at the College’s enrichment awards ceremony.  I felt really proud.”

Sarah is in her last year here at St Charles and has been nominated by a cross-section of college staff and also by peers for this award. She is a very deserving recipient having made an outstanding contribution to the life of the College during her time here in addition to being a thoroughly dedicated and committed student of Health & Social Care.  She is now about to embark on the next phase of her journey, studying Social Work at Bournemouth University. It has been Sarah’s sheer determination in the face of personal adversity that has got her to this point academically. We are confident that she will have a bright future ahead with her person-focused, caring and sensitive personality in her chosen field.

On receiving the award Sarah stated: “Receiving the award was wonderful! I was so happy, ever since I was in secondary school I have watched people get Jack Petchey awards and now years later I finally have one! I'm just grateful towards the people who nominated me and everyone in the charities committee/student council because without them this award would not have been possible.”

Sarah took a group of peers from the above groups, with whom she has worked closely, for a day trip to Bournemouth, using the winnings for transport costs and food.

Jeffrey has been nominated for this award by a cross section of college staff and peers. Unfailingly polite, Jeffrey is a fantastic example of the St Charles College ethos in practice on every level! In his final year with us now, he has thoroughly enjoyed his studies and he has used his skills set to benefit the wider college community on a number of occasions. He is reported to give 100% to every task he undertakes, always seeing it through to successful completion. He has helped out in the College chaplaincy with a number of events and made a fantastic effort and contribution during the College’s recent Charities Week (March 2019).

Jeffrey is an extremely kind, helpful and professional person who has gone out of his way, using his skills and talent to help peers and staff on numerous occasions and we wish him every success in his future ahead!

On receiving the award Jeffrey said: “When receiving this award I was amazed as I have never achieved such a great award like this before and it made me very happy. I enjoyed doing things around College so it was really nice to know others noticed and appreciated my contribution.”

Jeffrey is spent his £250 winnings on a trip to Thorpe Park for a group of L3 students. 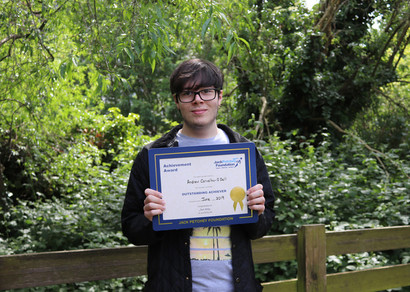 Andrew is in his fourth and final year here at St. Charles having successfully progressed through the ranks from L1 to L3.  He has been nominated for this award by the Travel & Tourism and Learning Support teachers as well as peers.  Andrew has enjoyed his L3 Travel & Tourism studies these past 2 years but is now ready to head off to university to study his first passion, Games Design.  Academically, Andrew has displayed an outstanding work ethic during his time in Sixth Form and has been an exemplary student. He is well on target for his D* grades which is testimony to his sheer determination and commitment as was the Grade 7 awarded for his GCSE English last year.  An incredible feature of his time in St. Charles has been his impeccable attendance and punctuality record; he repeatedly and consistently held a 100% record for 4 consecutive years. This is truly commendable , making him an inspirational role model for his peers.

On receiving the award Andrew said: “I felt honoured and over the moon about getting the award. I was very proud to be recognised for the part I've played as Tutor Rep and member of the LS department over the last four years. I'm going to have my certificate framed and hang it on my wall at home. Thank you, St Charles Sixth Form College, for giving me this award.”

Andrew opted to split his £250 evenly between the Travel & Tourism and Learning Support departments. Both departments will use the money to fund end of year activities for students; one to subsidise travel costs to Brighton for a group of Travel & Tourism/Geography students and the other to subsidise an afternoon of bowling locally.