After a long term and year, On Wednesday 26th June, a group of 40 plus students and 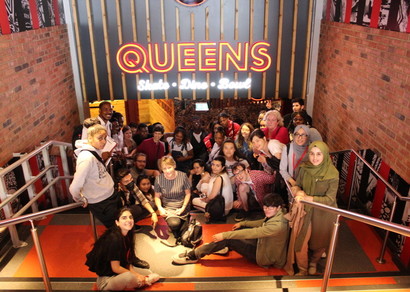 staff headed off to Queens Ice Bowling locally to engage in a fun and well-deserved end of year social event. Competition was in the air as students congregated to discuss team players they believed would lead them to victory. The event was organised by the College’s Learning Support Department for a cross-college cohort of students known to them throughout the year.

Waiting at the bus stop, the students talked about strategies of earning a strike. Rad Rybak, who studies A Level Maths, Religious Studies and Psychology advised his team mates to have a strong arm swing and Drishti Bhora who studies L3 Travel and Tourism stated ‘I’m going to pretend I’m not as good as I am; that’s my winning tactic!’ The short ride from the college to the bowling alley was buzzing with excitement and with talk of the students’ upcoming summer plans. Clearly everyone was in good spirits!

Arriving at Queens Bowling; game on! Rouelle Wilson-Thomas who studies BTEC Level 2 Business Studies, jokingly exclaimed, ‘I am the King of bowling’ while throwing a gutter ball. Determination and focus was engraved on the students’ faces as they strove to achieve a strike. The six-game round grew increasingly intense with Andrew Carvalho-O’Dell scanning each of the screens to suss out his competitors! Initially, L3 BTEC Sports student, Gideon Agyemang was in the lead. However, like a thief in the night, Joel Ofori, who studied L3 BTEC ICT and Music Technology gradually crept up the leader board and scored first place with 103 points. Congratulations to all those with who participated with enthusiasm and zealousness throughout  and well done to Joel Ofori, Gideon Agyemang, Barbod Habibazarian, Andrew Carvalho-O’Dell and Daniyal Shah, who scored the Top 5. And… the staff present were not that bad either!

After working up a sweat and posing for the traditional group photo, the students were treated to a Pizza Hut buffet. Students could not contain their excitement as they tucked into their favourite pizza slices! Clearly everyone had a fabulous day overall. L2 Business Studies student Antonio Louis Johnson stated ‘I can’t believe the day I have had; this is one of the best events I’ve been to!’ All the students were extremely appreciative of this organised trip-out and expressed their gratitude as they left, with some saying goodbye, knowing it was sadly the end of their time at St. Charles.

The Learning Support Department would like to thank all the students for their continued support and participation in their events. Ms McHugh, Head of Learning Support states, ‘Without you all these social and team building activities would not be so hugely successful and enjoyable.” Mary would like to thank all the LS staff who made this event a fun, enjoyable and inclusive activity. We wish all of you a very gratifying summer and for those leaving us, come back and see us of course! We would like to wish you the best of luck with all your future endeavours!

'Through the Director's Lens: The Art of Storytelling' with guest speaker Amanda Blue