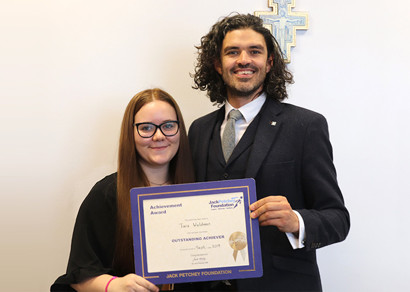 Tara has been nominated for this award by a cross-section of college staff and peers which is testimony to her commitment to her studies and wider college community. Having moved to London from Manchester over a year ago, I personally came across Tara and her infectious enthusiasm during her first 2 weeks at St Charles! She was sitting on the stairs in Manning Block and heard me asking for volunteers for the LS The MacMillan BIG COFFEE MORNING fundraiser when she sprung up from round the corner and called out; “I will help, Miss!” And that is exactly what she has continued to do at St Charles to date and with great spirit and energy. Our college chaplain, Ms Jamieson, describes Tara as “absolutely fantastic and as someone who is always up for a challenge. She is constantly offering up her time to help out in any way” and,in the words of her peers, is always working hard to include everyone along the way. Examples include various fundraising events for charity and helping out at open events. Most recently Tara has acted as a student helper at enrolment where Ms Cahill states she was “extremely reliable and competent. Her punctuality was impeccable and she quickly grasped the various processes involved.” She has also just been elected to the prestigious role of President of the College Council where she is already demonstrating excellent interpersonal and organisational skills and forging positive relationships with her peers. She is forward thinking and Mr Alawiye describes her as someone “with a drive to succeed whose infectious nature cascades onto others.” One of her first tasks in her role as President was to address an audience of 300 prospective students and parents on our recent Open Evening which she did admirably, creating a really good impression.

None of these pursuits have deterred her from her academic studies and future goals. A diligent student, Tara maintains a 100% attendance record. She has demonstrated real dedication to her courses. She is cited by her English teachers as showing great maturity and commitment and is someone who really wants to learn. Ambitious by nature, Tara is looking to study law at a top university going forward. To this end Mr Shehu, the College’s careers advisor reports that Tara has already completed two successful work experiences in well-known firms in this field. While at Baker McKenzie she won a competition for the best idea in the app proposal for Google and she used her persuasive powers on the BLCP law partners to secure £500 for her chosen charity Places2BE, a mental health charity for children, in a presentation which out shone 30 others during her placement there!

Tara balances her studies, volunteering and some demanding family commitments superbly. She is always cheerful and friendly. A young woman who has grown in confidence and maturity during her time in sixth form, she has proven herself to be a real asset to the college. We are in no doubt that she will continue to do this throughout the year ahead. Well done!

On receiving the award Tara stated: “I was extremely pleased to be awarded the Jack Petchey because I hadn’t expected it. To be honest, I was a bit embarrassed getting it in front of everyone in assembly from the Principal but it was nice to be rewarded for my contributions!”

Tara is splitting her award money between the College Council and the College’s careers department.