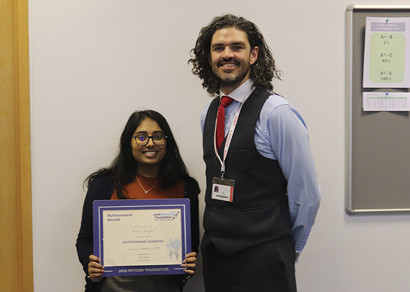 Business. She has been nominated for this award by a wide range of college staff and peers for both her academic progress and her wider contributions to the College community.

Academically Prachi is really focused on achieving and she sets herself high expectations. She demonstrates an exemplary work ethic and a resilience that is second to none. Her determination and desire to succeed is exceptional! Despite missing some time last year for personal reasons, Prachi worked hard to achieve excellent results (DM) which were testimony to her total commitment to her studies. Her approach and attitude to learning makes her a real role model for her peers. Her business teachers describe her as a model student who is eager to excel. In addition to her L3 vocational studies, Prachi has independently opted to take on an A level in economics this year and is determined to make a success of it.

Her performance outside the classroom is equally impressive. She is cited by staff as always being the first to put herself forward to help with any college event. She is an excellent ambassador for the college, volunteering at open events where she is described as being thoroughly dependable and responsible. She also acts as tutor group representative where she works tirelessly to motivate peers to get involved in tutorial and cross-college events and she doesn’t take no for an answer! Ms McHugh commends her infectious enthusiasm and can do attitude. She helped with numerous events organised by the College’s LS last year, most notably an International Women’s Day event and an end of year celebratory event for students, parents and staff. She also braved the cold selling Christmas trees with Mr Shehu as part of Young Enterprise.

She has played an instrumental part in the College’s charities week the past two years in her tutor group helping raise money for much needed causes e.g. Cancer Research, Sickle Cell Society, local charities. She is a member of the Charities Committee and the College Council. Last year she helped run a really successful Cultural Day celebrating the diversity of our student population and this year she played an integral role to the organisation of, with colleagues, the charity Sponge the Teacher event for St Charles Week in November ensuring no one had a free pop at the brave staff who volunteered! As if all that was not enough, Prachi is heavily involved in the Chaplaincy Committee and the College Chaplain, Ms Jamieson, tells us that “she spends her time trying to think how she can make the chaplaincy better for the student population” and comments “there is rarely a time that Prachi does not have a smile on her face!” Prachi has attended all the Kintbury retreats organised by the college during her time here to date where she is always positive and gives 100% to all the activities.

Unfailingly polite and upbeat, Prachi’s dedication to all aspects of her journey in sixth form is admirable. Her impeccable manners and mature and helpful personality make her a worthy recipient of this award. On winning the award Prachi stated she felt very proud indeed! She loves getting involved and making an impact; it makes her feel happy and alive. Prachi used her award money to help fund an end of term celebration for a cross-college cohort of students, including SEND. She also is using her funds to subsidise students who are unable to afford the full cost of the Kintbury retreat. Thank you Prachi!