Holocaust Memorial Day, which is commemorated annually on the 27th January, 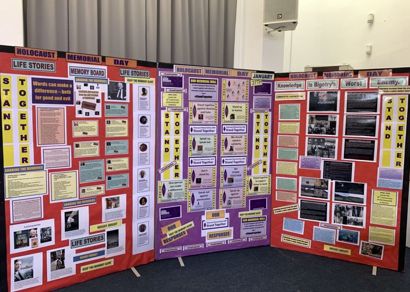 focuses us to remember the atrocities of the Second World War to ensure mankind does not repeat the horrific deeds of the past. The date marks the day in 1945 when the Russian army reached the concentration camp Auschwitz in Nazi-occupied Poland. It is a day that remembers those murdered in the Holocaust and in subsequent genocides in Cambodia, Rwanda, Bosnia and Darfur. HMD 2020 marks the 75th anniversary of the liberation of Auschwitz and the 25th anniversary of the Genocide in Bosnia.

Each year students from St Charles Sixth Form Catholic College participate in the Lessons from Auschwitz project through the Holocaust Education Trust alongside students from other schools and colleges in the London South region. The programme involves an orientation seminar to prepare students for a visit to Auschwitz-Birkenau, the principal and most notorious of the concentration and extermination camps established by the Nazi regime during World War 11 and a follow up seminar to reflect on the visit and explore the contemporary relevance of the Holocaust.  A level students Yehia Hassan, Jose Miquel Pereira Azevodo and Radoslaw Rybak represented the college in 2019 in this unique educational experience and were excellent ambassadors throughout.  All three students stated they felt privileged to have been part of the project and that it was a journey of learning and exploration not just about the history of the Holocaust but also the world we live in today. You can read their reflections of their visit below.

As a result of their participation in the programme, for their next steps project, they prepared and mounted a stimulating and educational display for college assemblies to increase the student population’s knowledge and understanding and encourage social action. The display mainly centred on this year’s HMD theme Stand Together and encourages us all to reflect on how genocidal regimes throughout history have deliberately fractured societies by marginalising certain groups and how these tactics can be challenged by individuals standing together to speak out against oppression.  They invited peers to write statements in support of this year’s theme which were posted on the display. Rad comments “HMD is massively relevant today and I felt it was important to do something so the victims are never forgotten and that anyone who denies these atrocities took place are challenged”. Yehia states: ”There is increasing division in communities across the UK and the world today and we must speak up” to which Jose added “More than ever we now need to stand together to stop division and hatred in our society”. To help keep the memory alive the students have organised for a Holocaust survivor to come in and share their story with peers later this term.

Our recollections from our participation in the Lessons From Auschwitz Project

Auschwitz was the place of suffering, where human dignity was reduced to nothing. It is incomprehensible to believe that humans could allow themselves to do such things to each other. It’s unbelievable to me. I felt quite uncomfortable throughout the visit. Constant questions kept popping up in my head prompting feelings of powerlessness and resignation. It was one of those times when I simply lost faith in humanity. I simply could not understand why.

The strongest feelings that I encountered while being in Auschwitz were triggered when I reflected on every one of the victims in the camp who had their own family, lives, stories and potential to enrich our world. I felt the most disturbed when the topic of children murdered in the camp came up. These innocent and vulnerable ones had nothing to do with the world’s affairs, yet could not escape from the insane ideology’s death sentence.  Another time when I felt quite disturbed during the visit was when I saw all sorts of prostheses and glasses. I thought then: “All these people spent their money to have those to try to lead the normal life but they ended up as an ash; German soldiers acted relentlessly as beasts.  It was inconceivable for me to accept that humans were and are capable of doing things like this.

I was born and raised in Poland so therefore I was well aware of what was happening in my country during WWII. My nation, with its very patriotic attitude, did its best to ensure that younger generations learnt about this dark period in our history as I grew up.  The Holocaust is something that should never have happened, yet it did; now what we have to is to make sure it never happens again. I think of myself as being very privileged for having had this experience and thank the college and Trust. It is now very important to educate others and disseminate the lessons I have learnt. History is very likely to repeat itself, I believe that people who should really be making sure it doesn't happen again is us.
Radoslaw Rybak

After my visit to Auschwitz-Birkenau, I experienced a mixture of emotions.  Strangely on arrival at Auschwitz I didn’t feel the way I assumed I’d feel. The entrance was intimidating yet it didn’t evoke immediate emotion in me; I didn’t weep or look away at any point but the still silence allowed me time to think.  Standing there I thought about how it must’ve been for those who arrived at these gates and camp; their suffering, mass murder and eradication. I could not stop thinking how the guards were not simply bystanders, they were the perpetrators. This made me reflect on the capabilities of human beings when fuelled with hate. It was a reminder, to me at least, that human beings are capable of notorious actions against each other and that continues to frighten me.

Overall, my experience proved to be more of a philosophical one as opposed to emotional only.  I have decided to take the lessons learnt from Auschwitz and encourage others to not simply see this as an atrocity but as a lesson that we must learn from so it is never repeated.
Yehia Hassan

The size of the camp and the buildings was definitely what struck me when I first walked in. The buildings, in particular, impose a sense of power and intimidation as you first walk through the gate which claimed work sets you free. This feeling is then furthered once you learn about the inhumane acts which occurred within those same buildings. Throughout the tour, I saw many buildings on each side of the pavements, almost like a regular street. This idea of a 'regular street' however was brutally dismantled due to the permanent site of the gallows and gas chambers in the distance. The various belongings which the prisoners brought with them could also be seen in a number of different galleries spread across the camp. These items included shoes, luggage, pairs of glasses, clothing, prosthetic limbs and more. Upon seeing all these items, one really does get a real understanding of the number of people that were killed in Auschwitz. It helps to understand the dimension of what 6 million people actually looks like as you get an insight into their personal lives and you are therefore reminded that they were all individual people with their own backgrounds, jobs, homes etc. Out of all the authentic galleries seen however, the one which undoubtedly impacted on me the most, and still marks me to this day, was the masses of human hair. This was undoubtedly the most impactful sight of that day for me. At the time, I didn't have the words to describe the feelings that I had and I honestly still don’t think I have adequate words to describe what it felt like. My recollection of the day was learning about the individuals that were murdered in these death factories and learning about their stories. From visiting this iconic place, I learnt more than what any history book could ever teach me. This is because books only tell you what happened and you can either remember or forget that information but by actually going to a place like Auschwitz 1, you not only learn more about its history but you can also feel it.
Jose Miguel Pereira Azevedo