If you think you can, you can!

The annual Jack Petchey Awards Ceremony, which celebrates the achievements 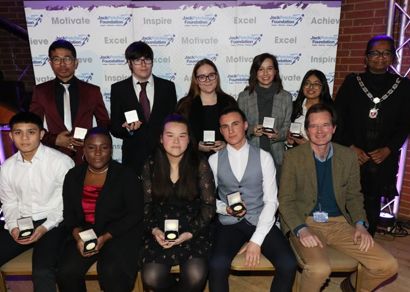 of inspirational young people between the ages of 11-25 in the tri-boroughs of Kensington & Chelsea, Westminster and Hammersmith & Fulham, took place on Monday 27th January 2020 at Kensington Town Hall.  Award winners representing schools and colleges in the boroughs were honoured at the event in front of a packed audience where they were given the recognition they truly deserved for their fantastic and wide-ranging accomplishments throughout 2019.

Nine winners from St Charles were amongst those who had their successes publicly celebrated in front of their families, friends and college staff. They were Daniel Sanchez Garrido, Jade Slocock, Franco Jardiel, Sarah Miles Roberts, Jeffrey Roque Fernandes, Andrew Carvalho O Dell, Tara Waldman, Alejandra Lozano Nodar and Prachi Bhagat. Dani, Jade and Jeffrey, all ex- students now, are working on their gap years and ex-students Andrew and Sarah are at university with Sarah travelling all the way from Bouremouth for the event!  Tara, Alejandra and Prachi are current students. They were each presented with their coveted Jack Petchey medals by Councillor Walaa Idris, the Deputy Mayor of Kensington and Chelsea. They posed graciously for the infamous group photo alongside her and the Mayor of Hammersmith & Fulham, Councillor Daryl Brown.

The presentations were a great source of joy and pride for the students and their guests. Their citations, which were read out as each student was presented with their medal, highlighted their incredible contributions in terms of leadership, teamwork, determination and flexibility within the College and the wider community. All the students felt immensely proud and in true Andrew (Carvalho-O Dell) style, he summed up the experience by stating “I nailed it with the handshake”!

The audience was also treated to some excellent performances during the evening with one from our very own St Charles’ students; Feben (Hagos) India (Francis), Lauren (Da Costa) and Isha (Korona) performed a lively and entertaining contemporary dance which was well received.  The evening was a great success. The students are all great ambassadors for the College and a credit to themselves and their families and as the citations stated all “are destined for bright futures”. We wish them all well and we will be keeping track of them!