Our Learning Support Student of the Month - Ugur Nacar

Ugur is in his second year here at St Charles Sixth Form College having previously attended Paddington Academy. He is currently studying L3 Art, GCSE English and Maths following his successful  internal progression from Level 2 Art and Design. Ugur tells me that he really enjoys studying art at St Charles and getting lost in new and exciting projects. He describes it like an “escape” as it gives him the freedom and licence to be really creative which is therapeutic! He says his art teachers are really supportive and inspirational and are always pushing him to stretch and challenge himself to produce high quality, innovative work. 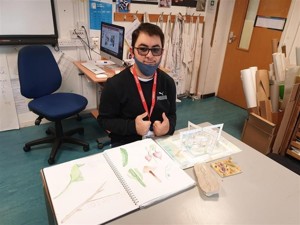 The Art and Design teachers, Ms. Abbas and Ms. Hemsley, describe him as an ‘asset’ to their L3 cohort as he always contributes ‘alternative and original’ ideas and Ugur never hesitates to get involved in the workshops and trips that the course offers we are told. He clearly demonstrates a strong passion for art, and illustration in particular and he would like to pursue a career longer term as an illustrator. He comments, “I’m very interested in the creation of cartoons and the illustration industry; I would like to become a well-known illustrator and make people happy and excited the same way I get excited for example  when I see a new cartoon.”

During lockdown last March, Ugur states that he initially thought remote learning for art would be difficult. He was worried  given the practical nature of the subject that he would not be able to complete the work at home and that he would not receive the support he was accustomed to  face to face in the college. However both Ugur and his LSA Ms Kilic, described the remote experience as very successful and rewarding mainly because Ugur ‘always ensured that he was online on time and  was ready to work.’  Ms. Kilic further described Ugur as a ‘resilient’ student and one who is always striving to better himself.  An affable student he is described as polite and thoughtful  by many members of the college community.  Ms. Coyne from the College’s learning support department describes him as  the ‘ideal’ student  due to his attitude and commitment to learning and he is cited by his tutor Ms McHugh as a real addition to the tutor group with his friendly and helpful approach.  Ugur’s 100% attendance is exemplary and he is a positive role model to his peers in this respect. He is also an active member of the learning support department and is always keen to get involved in their activities. He feels  the department has not only helped him with his academic studies but it has also helped him develop his confidence and to forge strong friendships with like-minded peers. I have ‘made some great friends at St Charles from across different courses, my tutor group and from using learning support area in my study and free periods”. 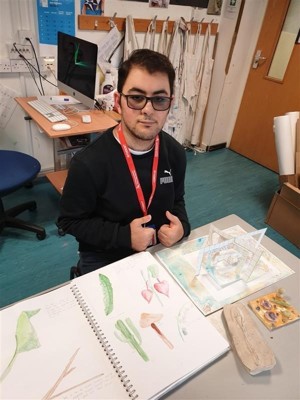 We are all very proud of Ugur’s journey and accomplishments to date here at St Charles and we look forward to seeing him progress to further studies and becoming one of the UK’s top illustrators!