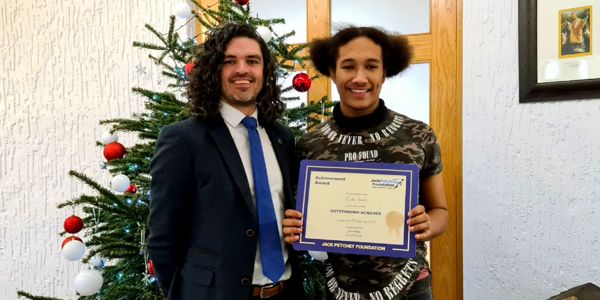 Cole was nominated for a Jack Petchey award by his Performing Arts teachers and cross-college staff. During his time at St Charles he has made such a positive impression on so many people in the college community.  He is described as an extremely hard-working student both in his Performing Arts and History studies in sixth form; he is a diligent and dedicated student in both areas.  He has made incredible progress accordingly to our Head of Performing Arts Ms Nash, who tells us and that Cole is determined to work towards his goal of becoming an actor.  He was commended on all the hard work he invested in the 'Take the Lead' programme with the Old Vic who noticed his strong devising and teamwork skills. In the Mousetrap Theatre project’s workshop the leader noticed that Cole was extremely helpful and polite to his peers.

Cole has been a fantastic ambassador for the Performing Arts department and the whole college through volunteering at open evenings and talking at open days about the course and why he loves being at St Charles so much. Cole features on the front cover of our prospectus and was interviewed for the College’s current marketing campaign. He spoke enthusiastically about what the college has given him as a student and was very motivational and inspiring. Our Marketing Coordinator Ms Ahmadian states, ‘Cole is an enthusiastic and polite student and that his testimonials demonstrate his appreciation of the St Charles Community and his gratitude to his teachers and peers.”

He is currently helping to co-ordinate the lighting design and costumes for this year's Christmas Cabaret enrichment production and he helped significantly with the staging of last year's show. Cole has a fantastic attitude to all aspects of his college experience. He is reported to always be on hand to help other students in rehearsals and to spend time helping staff with organising anything that needs doing.  Cole's peers know him to be the person they can go to for help and support.  Cole is always positive and helpful. On receiving the award he stated that he felt incredibly proud and thanked all those who nominated him.

A member of the college basketball team also, he trains hard to make sure that he can do his best for the Team.  Cole is a good all-rounder who has a bright future ahead of him! Congrats on your award.