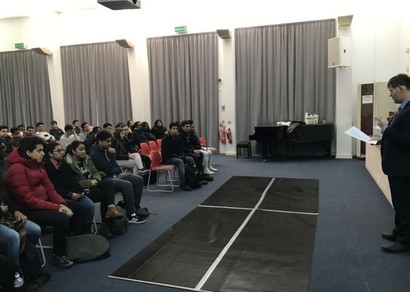 St Charles was proud to host Mr Philip Coggan, a columnist from the Economics Magazine. Mr Coggan was voted 2016's Journalist of the Year by CFA UK for his article What’s Wrong with Finance. He has previously worked as a journalist for the Financial Times and has written many books on economics and finance, such as: The Money Machine, How The City Works, Guide to Finance and Paper Promise. Mr Coggan delivered an inspirational talk regarding the economy and how it has developed over the centuries to become what it is today through globalised trade. He also spoke about the effects of Brexit on the economy and how the Government plays a vital part in how the economy is run and the influence upon investment and foreign investors.

Students were able to link up their current economics knowledge with Mr Coggan's presentation, which reinforced their breadth of information on how real economies function. In addition, Mr Coggan spoke about the new political developments in western society, such as the extreme right in France and Holland, as well as the recent American election of Donald Trump and its impact on economic and trade agreements. He also spoke about the rising influence of the "tech" sector in London following the creation of the "tech" sector in Old Street, London. However, with the Brexit decision he explained that there is the risk of companies and talent moving from London to Sotckholm.

The students found the talk very useful and engaging and we would like to thank Mr Coggan for giving up his time to come and visit us here at St Charles.