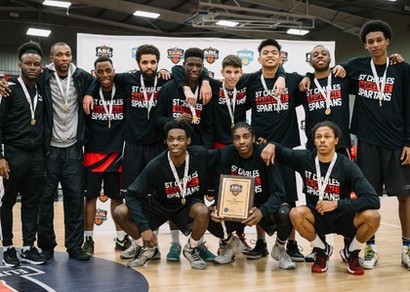 St Charles claimed the 2017 ABL Championship title after beating Gateshead 76-60 in the final at the Leicester Arena.

Mohamed Mohamed picked up the MVP award after producing a monster double-double of 19 points and 18 rebounds in the win.

Kayne Henry-McCalla had a game-high 23 points including some highlight plays as his side closed on an 11-0 run to ice the game.

“For all the hard work they’ve put in over the course of the season – it shows the hard work, sacrifice and preparation they’ve made.

“I want to congratulate Gateshead for reaching the final and making it interesting.

“Most importantly the players have developed and grown – it feels good and I’m impressed with the progress over their journey.”

Gateshead trailed early on, but took their first lead on a three from Sean Murphy before the game was tied at 17 at the end of the first.

Blake Keeble began to heat up in the second with three triples in the period and his buzzer-beater gave the North-East side a slender 37-35 advantage at the half.

St Charles stepped it up at both ends in the third and began to edge away with a five-point lead before another Murphy triple ended the quarter at 50-52.

However, Gateshead were held to 10 points in the final period as St Charles made their move before closing out the game with an 11-0 in the final four minutes.

MVP, Mohamed commented: “It feels good [to be champions] – our team executed well.

“Down the stretch, we improved defensively – we reversed the ball, got defensive and offensive rebounds with a better job of boxing out.”

Many Thanks to EABL for the original report, which you can read here