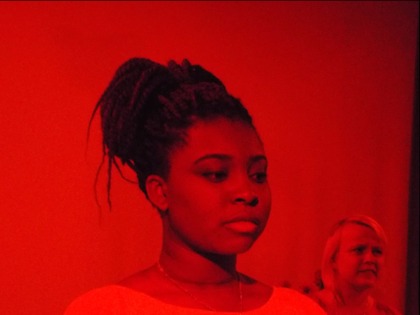 The atmosphere in the Theatre workshop was electric as the Year 12 students staged Ibsen’s Hedda Gabler to a packed audience at the end of term.

Ibsen's troubling, tortured masterpiece of 1890 is about the General's daughter, Hedda, who deliberately destroys the masterpiece written by her one-time lover, before shooting herself. The play was an enjoyable production with its compelling and gritty content, which enabled the students to inhabit their roles with ease.

Notable performances where given by Dilys Ward Anderson in the lead role of Hedda, who embodied the unhappy and malicious character intent on demonic destruction. Edi Christ Goma managed to convincingly present Tessman as her talentless and obsequious husband with humour and charisma.

None of this would have been possible, however without the support of the rest of the cast, who held everything together, showing encouragement with each other as all good actors do. It was clear that many hours of hard labour had gone into both the rehearsals and the beautifully lit production, with significant attention to direction and sound accompaniment. It provides the Year 12 students with an excellent platform to move into Year 13. Any students interested in studying Performing Arts or Drama & Theatre Studies can contact kna@stcharles.ac.uk for further information.