St Charles was pleased to welcome Sir John Kingman today, who visited the College to 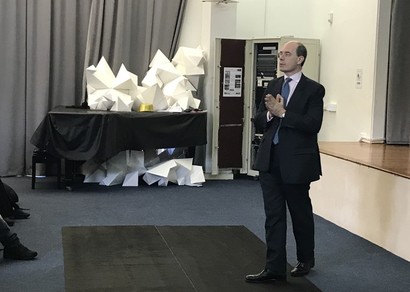 give a talk to the students.

Sir John was appointed as Chairman of Legal & General Group plc from October 24, 2016 and he is also non-executive Chair of UK Research and Innovation (UKRI), a new body being established by the British Government to oversee the strategic direction of science and innovation funding in the UK. John has had a long Whitehall career and was closely involved in the UK response to the financial crisis, handling the resolution of Northern Rock, amongst many other important financial negotiations.

All this expertise lead to an inspirational talk for the students. Sir John spoke about his career, his time at university and beyond, including his time with Treasury and Legal and General, amongst others. Students took on board many positive messages, such as: do something you have an interest in; something that you enjoy but that also challenges you.

Sir John was a fantastic speaker and was able to capture the audiences' attention with ease due to his down-to-earth personality.