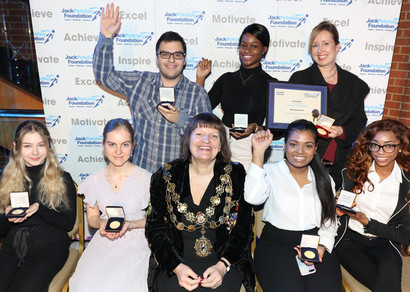 young people between the ages of 11-25 in the Hammersmith & Fulham, Kensington & Chelsea & Westminster area took place on Monday 29th January at the Kensington Town Hall.

Amongst the award winners receiving their medals from local dignitaries were of course the St. Charles Jack Petchey winners for 2016-17. Each received a rapturous applause as they were presented with their medals and posed for photos with Councillor Marie-Therese Rossi, The Worshipful The Mayor of the Royal Borough of Kensington & Chelsea. The evening was one of great joy and pride for students and staff alike and those in attendance watching the proceedings included our College principal, Mrs Elaine Taylor. There was an atmosphere of a real sense of achievement amongst our winners who have done themselves and the College proud.

St Charles also had nominated a leader award this year which went to Katrina Nash, Head of Performing Arts at St. Charles for her untiring dedication to the College community organising the Christmas Cabaret Production annually for a host of cross-college students and for her infectious enthusiasm as a teacher and mentor.

We were also privileged to have been entertained on the night by our very own Eddi Goma and Dilys Ward Anderson. The evening was indeed a wonderful occasion and you can read the stories of our inspirational award winners on our website.

In addition Jack Petchey’s PR Department did a press release on one of our winners, Lubechi Okosieme, and invited both our performers to perform at upcoming events.  Overall it was a rewarding and eventful evening.