In March 2018, two students from St Charles Sixth Form College, Raafay Khalid and Robert Norat were selected to participate in the Lessons from Auschwitz project, organised through the Holocaust Education Trust. Both students, who are studying for their A levels, were delighted to represent the College in this unique educational experience, alongside other students from schools and colleges in the South London region. They were accompanied by staff member Jaleel Sobers.

The project included a visit to the former Nazi concentration and death camp Auschwitz-Birkenau, the principal and most notorious of the concentration and extermination camps established by the Nazi regime during World War II. In addition to the visit itself, all three attended an orientation seminar to prepare for the visit where they heard a holocaust survivor, Zigy Shipper, speak of his experiences and they learnt about pre-war Jewish life and attended a follow-up seminar to reflect on the visit and explore the contemporary relevance of the Holocaust.

Throughout the project, the boys were excellent ambassadors for the College. Although it was a challenging experience, due to its intense emotional impact, they found it utterly rewarding, stating that it was a fantastic opportunity and a journey of learning and exploration - not just about the history of the Holocaust but also the world we live in. Raafay and Robert are currently planning their Next Steps Project to disseminate the lessons learnt within the College community.

Below, you can read their initial recollections of the visit: 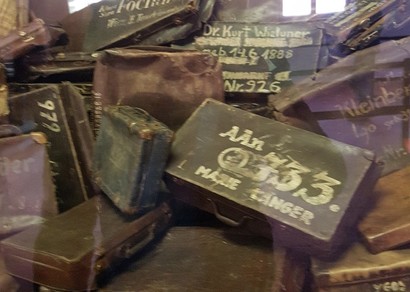 "Speechless after the visit to the village of Oswiecim and both camps of Auschwitz, I was but  left with a memory that will be with me indefinitely. The visit to all these sites was a powerful reminder to me of the deeds people can accomplish and to what lengths to which they go to achieve them.

From the airport the first visit was to Oswiecim not far from the camps  where we stood on the site of the town’s former largest synagogue and when exploring the market place an interesting fact was brought up about the town’s population,which had a Jewish majority prior to the events of the Holocaust. Also the mingling of both Jewish and catholic communities showed how, even with anti-Semitism, there were communities who could coexist peacefully with each other. After the town we went to the first camp Auschwitz 1, and the first thing that struck me was the close proximity it was to the town and how the buildings were packed together in a cramped environment. The displays in the blocks were disturbing and saddening, for example each suitcase in a pile on exhibit had a name and date written on it, giving a humanising aspect to the victims. However the most upsetting sight for me was  seeing the hair of female victims that was put on display. It both horrified me and  made me question how people could carry out these atrocities and the exhibits of clothing made from human hair shocked me in ways unimaginable. Also there was a barracks which housed an exhibition called the book of names and listed a significant amount of the victims of the camps of Auschwitz and this list was huge with the names and dates of death listed down.

After the visit to Auschwitz 1, we moved onto the massive camp of Auschwitz-Birkenau, and apart from the size of the camp, the space between the barracks and the gas chambers was unbelievable. The chill of the wind froze my hands and made me wonder the conditions suffered by victims of the camp who never were properly dressed and from what I was told may not have had proper shoes, if any,  for the conditions.

The barracks which housed the victims, were cramped and the conditions that were described in how they lived was awful, with details such as having to collectively use the bathroom, which was only slabs of cement with holes dug into them and the wooden structure was ironic in sheltering the prisoners, as the structure did not bar the elements from entering those structures. Towards the end of the visit, we had a look of the remains of the gas chambers where rubble is all that is left of it now  and we visited a processing area for the prisoners. At the end of the tour a small memorial was held in honour of the victims. This was where my tears were shed with the Rabbi giving his final remarks and we were given the  opportunity to lay a candle on the memorial ending the visit,  leaving a powerful image and a renewed idea of what the Holocaust was and how it actually began." Raafay Khalid. 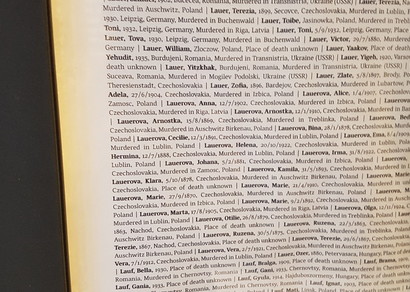 "My visit to Auschwitz was a very interesting experience that changed my perspective on the Holocaust;  the systematic mass genocide of  groups of people such as Jews, Gypsies and Homosexuals.

When my group and I arrived at Auschwitz One, I felt a strong feeling of malaise as we walked through the ironically named Arbeit macht frei (work sets you free) entrance. I suspect that I felt such a feeling of discomfort due to the atmosphere that the place carried. This feeling was intensified when we went on a tour around Auschwitz One, a small compound relative to Birkenau. However, we learned that within each barrack there lived around one thousand people, a very dense and uncomfortable environment to live in which was made worse by the fact that the victims who lived there, lived in a state of privation and indignity. The apotheosis of my experience at Auschwitz One was within the few barracks that contained the possessions of the victims prior to them being emitted to the abhorred conditions which they had suffered. The possessions were a key memory of my visit because I received an insight into the lives of the victims prior to the Holocaust. What I discovered was that they were ordinary people who were doctors, lawyers, businessmen and many other professions. By extension of this, they were deeply integrated within society and it took a dictatorial xenophobic regime to change this.

After we left Auschwitz One, we subsequently moved on to Auschwitz Birkenau, which was an entirely different experience in and of itself. What made Birkenau a more perturbant place to visit than Auschwitz one was that it was specifically built for the malignant mass murder of the Jews on a grandiose industrial scale. Auschwitz Birkenau is significantly bigger than Auschwitz One by a large fact. It’s very vast but very sparse. However, one can imagine the amount of people who were transported there, annihilated by way of gassing and then promptly disposed of by use of the multiple chimneys that still jut the landscape of Birkenau. What makes this genocide very unconventional regarding to the many mass genocides that have occurred throughout history was the manner in which the Jews were exterminated at Auschwitz was very impersonal and exceedingly efficient.

To conclude, I would like to state that it is imperative not to forget what happened at Auschwitz and the multiple other concentration during the Second World War, otherwise we ourselves could possibly fall victim to the old adage, 'Those who cannot remember the past are condemned to repeat it.'" Robert Norat.

Jaleel Sobers, from the College’s Learning Support accompanied Raafay & Robert on their visit to Auschwitz. Here are his recollections:

"As we got off the coach on our arrival at Auschwitz One the first thing we saw was the infamous Arbeit macht frei (work sets you free) which immediately made me exclaim “Wow” because of the blatant falsehood of that statement. We walked around the camp and entered a room full of suitcases. At this point I realised these people who owned these suitcases weren’t aware that they were NEVER going to go home again. This was evident from the fact that they had written their name and addresses on their suitcases to pick them up later. We then carried on to another room where we saw hair, hair that was shaved off the corpses of those that were gassed, shot, starved, blown up or frozen to death. We are standing there staring at the hair of thousands of murdered individuals. The emotions I felt when I saw that cannot be described. The lives of the victims were meaningless to the perpetrators.

We then left Auschwitz One and made our way to Auschwitz Birkenau. When we arrived at Auschwitz Birkenau the first thing I noticed was its immense size. As far as the eye could see, the camp spans. With the day being blisteringly cold it was difficult to imagine being dressed in next to nothing 70 years prior with no electric heaters or source of warmth to keep one alive. Thus we heard stories of death marches where many individuals collapsed and were immediately shot or left to freeze to death.

The stories we heard and the sights we saw were hard to believe for some but many of us on the tour also discussed how easy it seemed for one human being to treat another human being  so poorly and claim it was simply part of their job  to do so. The many genocides post Auschwitz that have taken place worldwide is further evidence of this. Feeling the nail marks inside the gas chamber from the victims desperately trying to climb out as they were suffocating and seeing the living conditions of 300 people having to share one makeshift toilet was staggering.

Like I said before, this was a life changing experience for me and I am thankful to the Holocaust Educational Trust and St. Charles for giving me this opportunity. It takes a lot of work for someone to keep a memory alive and that is why what the Trust is doing in taking time and effort to keep the names and stories of those who suffered alive is to be commended and supported at all times."