On Wednesday the 27th June 2018 the Learning Support Department at St. Charles 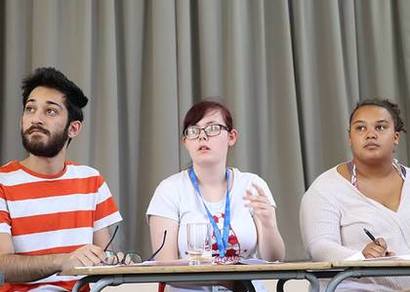 Sixth Form College held an innovative and exciting Student Voice event. Building on the success of last year’s Student Conference (June 2017), which saw a selection of cross-college students discuss a variety of key topics relevant to the LS Department and the College, staff and students wanted to go one step further this year by involving even more students and providing immediate feedback to the College’s Senior Leadership team.

Over 70 students from our student population attended the Student Conference & Question Time on the 27th.  The sample cohort spanned all levels and abilities, from L3 A level and Vocational students to Level 2 and 1. Students with specific needs were well represented.

Following registration and a short introduction to the aims and objectives of the day’s programme by Mary McHugh Head of Learning Support, students broke into groups and, in true conference style, headed off to their respective conference rooms for the morning’s session. Each group, facilitated by members of the College’s Learning Support team, engaged in deep and often controversial debate on topics relating to the student experience in St. Charles.  All groups were directed to discuss and provide feedback on Curriculum/Teaching & Learning and Student Well-Being and additional group discussions focused on Extra-Curricular Activities, Student Voice and College Facilities.  Each group nominated a student ambassador who summarised their group’s feedback. Ms McHugh who popped in to take photos and had an oversight of the morning’s conference, commented that students and staff were working very well together in their groups. Students were clearly expressing their views on what was working well in College as well as articulating their opinions about what was working less well and recommending improvements.  Copious notes were recorded all round and then it was time for a well-deserved break! 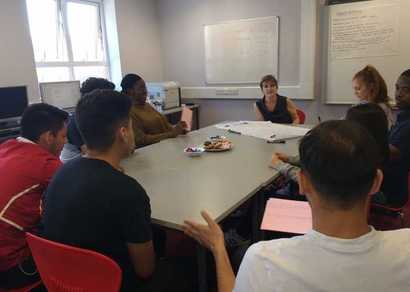 After the cupcakes, it was time for more work! The second session of the Student Conference saw each group devising some thought provoking questions arising of their earlier discussions to put to a panel of the College’s senior leaders. The panel, who were convening in the College’s Manning Hall, were overheard to say that they expected David Dimbleby to come through the door at any moment now! The set up did indeed mirror ‘Question Time’ with the panel strategically placed at the front and the students formed the audience.  What was noteworthy was that the panel was skilfully chaired by our very own student ambassador leaders; Megan Goom-Davies with Kiaya Chick and Raafay Khalid.  All 3 did a superb job fielding questions and directing the flow of the discussions. The panel were equally impressive with their responses to some tricky questions.  There was not enough time to ask all the prepared questions but popular ones covered included the new attendance and detention procedures, the College timetable, teaching & learning and pastoral support.  The whole event was run very professionally and it was agreed that the event was an excellent example of Student Voice in action. The College Vice Principal, Colette Thomas, thanked students and staff for their participation and contributions.

But it wasn’t over yet. Just as Question Time was coming to a close, out from behind the curtains appeared ‘Stylus Shock’, a band made up of our very own college students who were all involved in the morning’s activities. To close the event they performed a composition of their own to the surprise and delight of the audience. This was followed by the infamous pizza lunch for all participants which served as a fitting end to a fantastic day’s programme and end of term.

Well done to everyone involved and thank you for getting involved.