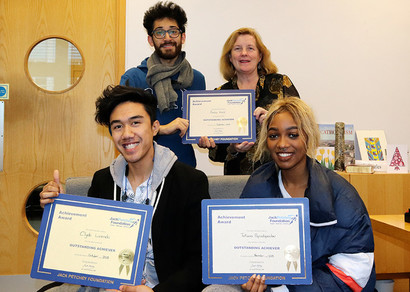 Raafay has been nominated by his teachers, peers and Ms Mc Hugh for his total commitment to his studies and contribution to college life. Raafay is in his second year here studying A Level History, Politics and English Literature and is really focused on achieving his potential. He is described as a very diligent student whose performance reflects his engagement and enthusiasm for his studies.   His performance outside the classroom is equally impressive. In March of last year he was selected as one of 2 college students to represent St Charles on the Lessons from Auschwitz programme organised by the Holocaust Education Trust which included a visit to the principal and most notorious Nazi concentration and death camp, Auschwitz-Birkenau. This was an extremely challenging experience due to its emotional intensity but the maturity and resilience with which Raafay embraced the experience was exemplary.   He was an excellent ambassador for the College throughout the various stages of the programme with his insightful and reflective contributions. On his return he committed his recollections to paper for an informative and engaging article for the College website and with another A level student Robert Norat, who accompanied him on the programme, planned their next steps project to cascade their learning from their visit to Auschwitz to the student population. This resulted in a truly inspirational and thought provoking video, which can be viewed on  our college website. The professionalism with which Raafay approached the video was reflective of his genuine interest and commitment to the overall project.

Raafay’s involvement in and contributions to college life did not stop there. In June 2018 he was one of 3 students who co-lead and skilfully chaired an innovative Student Voice Question Time event in the College’s Manning Hall where a section of cross-college student put a series of questions, which emerged from a Student Conference earlier that morning organised by Ms Mc Hugh, on key college topics such as teaching and learning, personal well-being, extra-curricular etc to a panel of senior leaders. Raafay was a true professional, fielding questions from the audience and superbly directing the flow of discussions.  He continues to be actively involved in college activities, most recently attending a college educational visit to SOAS attending  a Sixth Form Japan Day event attending workshops on Japanese culture and heritage. He is also in the process of organising a Holocaust survivor to come and speak to our students.  His enthusiasm and commitment to both these college activities coupled with his equally exemplary approach to his studies and wonderful personality made him an extremely worthy recipient of the award.

Raafay says: “I was quite surprised when I received the award since it was so unexpected but I felt privileged in receiving it and felt proud, but was still very unexpected since what I had done was out of my own interest.”

Raafay is kindly donating his award winnings to facilitate some public speaking workshops for students at St Charles in January and a Holocaust survivor speaker later on in term 2.

Clyde has been nominated for the Jack Petchey Award for 2 years in a row now which shows the high esteem he is held in by a range of people across college. He has received nominations from his tutor, teachers, peers and the College Chaplain.

It is Clyde’s helpful and supportive approach coupled with impeccable manners that make him stand out and serve as an ideal role models for others. His tutor Ms Muraj and  business teacher Ms Campbell tells us that he is extremely helpful with all class and tutor group activities, leading by example. He is reported to always be the first to put himself forward to help with any college event and he has acted as a wiling host at the College’s marketing and open events on many occasions where he is always an excellent ambassador for the College. He is heavily involved with the College’s Charity Committee where he works consistently hard to ensure the success of their activities. Most recently he helped with the McMillan Coffee Morning Bake Sake raising much needed money for the charity with the support of peers. The College Chaplain states that he is always welcoming of new members to the Committee and encouraging others to get involved. He is also regularly seen assisting at college liturgies. This is indeed the type of community spirit we like to see and Clyde does everything always with a smile! We are confident he will continue to contribute wholeheartedly to the College community during the rest of his time here as well as continue to make a success of his L3 Business studies which he enjoys.  All his Business teachers all speak highly of him and Ms Cotter from the College’s  LS Dpt comments that he is a lovely and polite young man which accurately sums up Clyde’s personality indeed.

Clyde says: “I am honoured to receive the Jack Petchey award.  This award is not only for me, but for others and through it, I can support other students which is great. When the award was given to me by Ms. Taylor, I did not expect it - I was shocked. To other students who have worked hard, keep it up and your efforts will be recognised just as mine were!”

Clyde bought a spinning plate activity for the College chaplaincy area as it proved a huge hit at the recent college residential retreat trip to Kintbury!  He also used his money to fund a very successful and engaging e-safety training event for a cross section of college students.

Tatiana was nominated by Mr Hall, Head of sports and her nomination was supported by all her teachers on her L3 Sports course and English as well as her basketball coach, pastoral staff and peers. Tatiana’s journey at St Charles has been impressive. Having come to the UK from Greece with English as her second language, she rose to the challenge of her academic studies and successfully passed her L2 sport course and progressed to L3 sport. She is currently in her second and final year where she consistently achieves distinction grades and boasts a consistently outstanding 100% attendance record. She is a popular member of her sports group and is cited as a real role model for girls and their participation in sport. She is planning on studying sports science at university and is well on target to achieve this.Tatiana also studies English alongside her sports studies and English teacher, Ms Chilton states that Tatiana brings a real positive energy and warm sense of humour to the lessons.  She sets herself high expectations and her determination to progress is an inspiration to peers. Her tutor Ms Adams describes her as a model student who is a very helpful tutor group representative who relates well to other students. Her pastoral manager, Ms Lancaster, states her enthusiastic willingness to volunteer make her a valuable college ambassador at college open events guiding prospective students and parents. She regularly helps at college open events with enthusiasm.

In addition to her studies and tutor rep work, Tatiana is an active member of the College’s Girls’ Basketball team which she has captained for three seasons now. This involves intensive training on a weekly basis with the team which she is totally committed to. The team competed in the AoC London Regional championships 2017/18, winning in the process and as a result went on to be part of the AoC squad representing London at National Level.  This was indeed quite a feat as had not been achieved by the College previously and her basketball coach Josephine tells us that Tatiana’s leadership and determination was a major contributing factor in this success story. She was nominated and awarded Player of the Year in 2018 for her efforts. Outside her participation in the college basketball team, she also works voluntarily with EPIC in Kensington and Chelsea borough as an activity leader, coaching younger children in a range of different sports activities and marshalling localised events.  And if all this was not enough she is currently completing her work experience at Anytime Fitness in Kilburn where she has been a real credit to the college with her approach and work there. She has already been offered employment once her placement is completed with the added bonus of potentially gaining additional qualifications there. In Mr Hall’s word, “Tatiana continues to shine and is a true asset to the College”. She is a bubbly, humorous and energetic person with great ambition and determination and we are confident her success story will continue.

Tatiana says: “I was surprised, I didn’t see it coming! I felt really honoured to receive the award and I am very grateful to those that supported me.”

Tatiana, loyal to her favourite sport, has given her award winnings to purchase some equipment for the girls’ basketball team.