The annual Jack Petchey Awards Ceremony, which celebrates the achievements 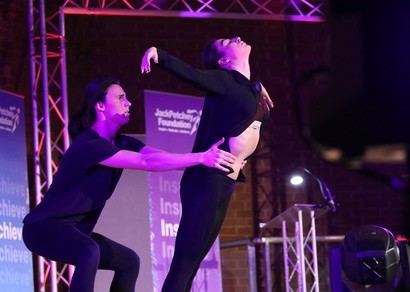 of inspirational young people between the ages of 11-25 in the local boroughs of Hammersmith & Fulham and Chelsea and Westminster, took place on Monday 4th February 2019. Award winners from across schools and colleges in the two boroughs were honoured during the event and given the recognition they deserved for their accomplishments in 2018.

Megan, Daishain, Tianay, Kiaya, Dilys, Robert, Raafay, Clyde and Tatiana from St Charles were among those who had their successes publicly celebrated. They were presented with their coveted Jack Petchey awards by the Mayor of Kensington, Marie-Therese Rossi, and the Mayor of Hammersmith & Fulham, Daryl Brown.

The presentations were a great source of joy and pride for the students as they took place in front of peers, family, friends and college staff, all of whom had gathered to celebrate their achievements. Their citations, which were read as each student mounted the stage to receive their medals, truly highlighted their incredible contributions in terms of leadership. teamwork, determination, commitment and flexibility within the College and the wider community.

The audience were also treated to some stunning performances during the evening, with two acts from St. Charles. Dani Sanchez, Federica Rodelli and Jade Slocock performed a breathtaking and exquisite contemporary dance titled The Mirror and they were truly spectacular! Later on in the evening’s proceedings, Dilys Ward-Anderson performed a powerful rendition of One Night Only from Dream Girls. The evening was undoubtedly a huge success and the students left us all feeling really proud.